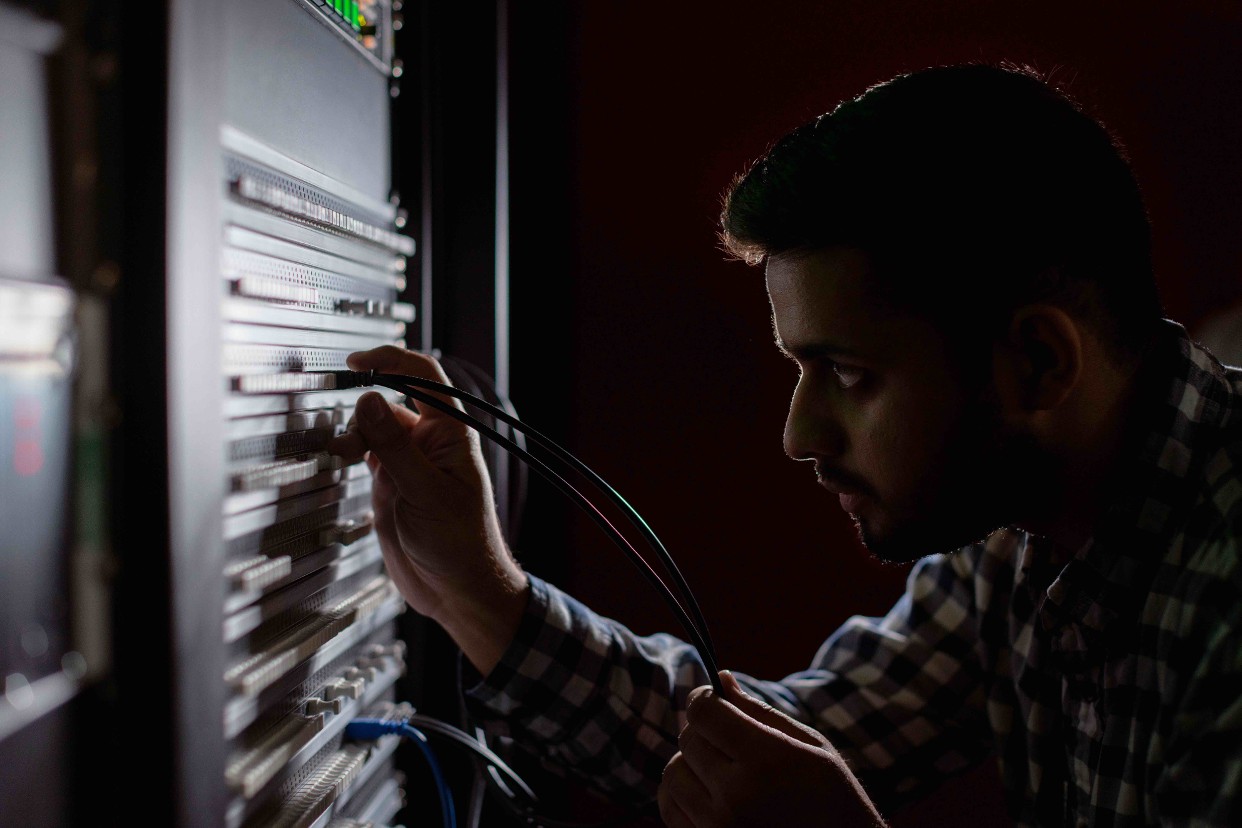 Network engineer interview questions can range from the incredibly straightforward (“Tell us about a time you overcame a personal challenge”) to the mind-numbingly complex (“Describe for us in detail how your strategy resulted in a decrease in data loss”). Fortunately, you can prepare for pretty much anything that will hit you during a network engineer job interview.

Network engineers often have broad jobs; in a given quarter, they might be tasked with anything from the implementation and supervision of an internal network to figuring out why the firm’s routers aren’t working anymore. According to Burning Glass, which collects and analyzes millions of job postings from across the country, network engineer is a job with very high demand (147,448 job postings over the past 12 months) and projected growth of 6.5 percent over the next 10 years.

Given its scope and importance to the organization, it’s perhaps unsurprising that network engineers can pull down hefty salaries (Burning Glass calculates the median at $104,777). But in order for a company to entrust you with that amount of responsibility (and pay you a hefty salary), you need a broad portfolio of skills—not just technical ones such as Python programming, but also communication and time-management skills:

We spoke with BitTitan’s manager of DevOps, Rusty Chapin, to find out the challenges facing today’s network engineers, get some key tips for interview preparation, and the network engineer interview questions you should be asking.

What are the challenges that network engineers face?

Chapin said one of preeminent problems is security, as the threat landscape changes so rapidly and dramatically, which means network engineers have to know what has occurred on their network, as well as new threats that have emerged in general environment.

“In addition, they need to be aware of new communications protocols, cypher suites and encryption protocols—there’s a whole range of threat problems that emerge at a daily basis,” he said.

And while there is still a strong element of hardware networking among current network-engineering jobs, Chapin noted how a lot of the work is branch office and cloud networking.

“It’s about flexile, scalable network architecture in the cloud,” he explained. “There’s still some datacenter work to be had, but it’s mostly in that cloud space, so scalability and growth are key concerns. What happens when your product goes viral? Can it handle those massive increases in transmission, and what are the costs?”

Chapin said it’s critical to be up-to-date on current on topics in the network engineering field, and knowing what’s occurred in the market recently. For example, has a large network security firm just been hacked?

“I think the technical aspect of networking engineering is tremendously important, but all of us are looking for the individual who breathes and eats and sleeps their field,” he said. “The ones reading up on articles about the space, new players, what new things are out there. If someone comes in and knows the technology really well, but really has nothing to say about the landscape or how they could revolutionize the way you network, it doesn’t show the same level of interest.”

What questions do technical recruiters ask?

Chapin said questions could range from tests that track your ability to do subnet calculations, or whether you know how byte addressing works, and other theoretical aspects of network engineering.

Other interviewers could present scenario-based situations. For example, an organization with a remote branch office, a central hub office and logistics center across spread across the country; how do you design the connectivity between those offices, and why you would you design it that way?

“Networking is one of the most fundamental elements of IT, so there many ways to solve a problem, and every network has pros and cons,” he said. “Questions could also focus on problems from lost connection links and the impact of network failure at device level and at router levels.

What qualities make a good candidate?

“With the change to [a] more flexible software-driven approach, we’ve had to own the concepts and the solutions, not just the technical task,” Chapin said. “We have to understand what the larger picture is.”

Emotional intelligence and “soft skills,” such as how well you perform under pressure, will be key qualities. That means being able to handle stress, being able to communicate with team members, and knowing when to lead or support. Your skills in that regard will definitely come up in the course of network engineer interview questions.

“Can you have a networking conversation with an executive, and tell them why it’s important? Are you able to construct very deeply complicated and technical thoughts into understandable communications? That piece is immense,” he added. “You don’t always get to be the rock star. We want people who can be the rock star in the moment, but then can also step back and support another player on the team that’s having their moment.”

What questions should network engineers ask?

“In an interview, it’s extraordinarily powerful when a candidate asks questions that lead the interview itself, because that helps shift the conversation and makes you stand out post-interview,” Chapin said.

It’s also important to ask about the company’s challenges—because chances are good that, if you accept the job, those challenges will become your challenges.

“Ask about outage events, recent failures, ask about those types of things, because they will uncover how much stress you’ll expose yourself to if you wind up in the job,” Chapin said. “Which you’ll solve, of course, because you’re a good network engineer.”

This article was originally published on Dice.

Photo by ThisisEngineering RAEng on Unsplash