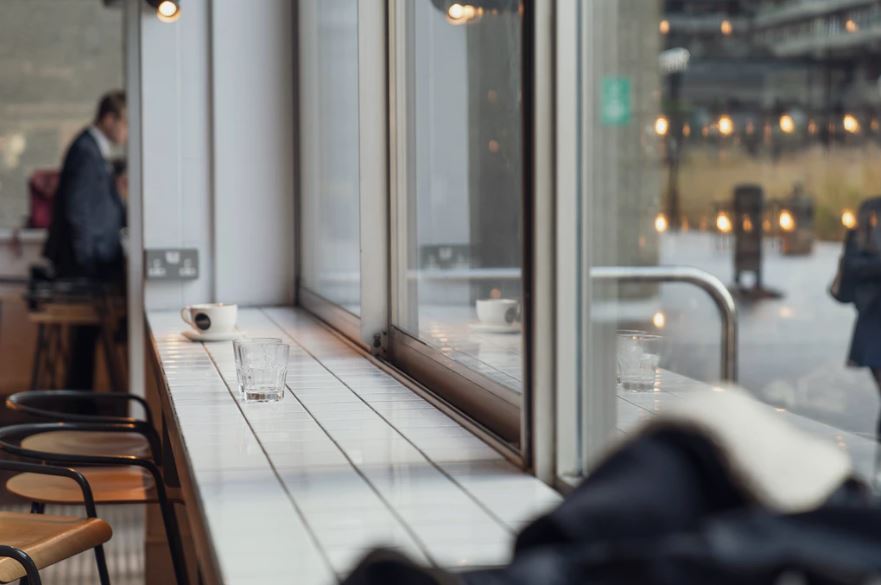 As some countries start talking about the possibility of ending the virus lockdown, banks are going to have to think about what they are going to do.  Clearly, things are only going to get back to normal slowly – packing the employees back into rows of desk islands across the trading floor and sending them all up in crowded elevators to remove food from the communal canteen is not going to be an acceptable working practice for some time.

Minds are already addressing the solution. In China, the real estate company Cushman & Wakefield has produced a 300 page safety manual for its tenants, covering everything from the first arrival of employees in the morning to the last disinfection at night. However, it's Cushman & Wakefield's Amsterdam office that has done the most interesting work 'envisioning' office futures,

The firm has a proposal for remodelling office spaces to become more coronavirus resistant that could catch on in finance and elsewhere.  They’ve called it the “Six Feet Office” (although that’s actually 18cm closer than recommended).  It turns out that when you start thinking about what would have to change in an office to make it possible for people to socially distance, there’s quite a lot that needs to be done.  Rule Four on their concept website, for example, is “Walk the office clockwise, always and everywhere”, so that people don’t have to pass one another.  They suggest putting arrows on the carpet so that everyone knows how the one-way system works.  You also might need to put an app on your phone so that it makes a noise (and logs the event with management) if you get too close to a colleague or transgress the directional guidelines.

There is, of course, an element of talking up one’s own business here; office building companies might be frightened that people will start working from home a lot more, so they have every incentive to try and make sure that each person in any given office requires a lot more space.  They also, to an extent, admit that there’s not necessarily a lot of point in doing complicated dances to stay two metres away from your colleagues if the air-conditioning system is just recirculating all the stuff they breathe out anyway. (The distancing and people-flow concepts seem to have been adapted from practices used in hospitals, which spend a lot more money on air filtering than your typical trading floor).

The reality is that the solutions adopted are likely to be a lot more invasive than just having arrows on the carpet and hall-monitors to enforce clockwise walking.  The only way to keep coronavirus out of the office is to keep sick people out of the office, and that’s likely to involve testing.  Some companies are installing walk-through temperature scanners, while others are looking forward to the availability of antibody scans and thinking about how they’re going to ask the employees for the necessary blood samples.  It might make sense to remain on the “Home Team” for a while.

Separately, if you’ve mastered the art of looking professional on videoconferences, you might now notice that you no longer necessarily need the same business wardrobe.  Specifically, you don’t need a business wardrobe below the waist.  And if you’ve got half of a suit and some expensive designer shoes you no longer need, there’s a business that can turn them into spare cash.  Lisa Caldwell, of “Pre-Loved Closet” in Sydney is an executive assistant and nanny for an unnamed hedge fund manager and last year she discovered that, while the eBay market for a thousand-dollar handbag is sparse and unreliable, plenty of people seem interested in hedge fund cast-offs.

So, while her days are presumably spent keeping the kids out of the videoconferencing room, Caldwell's leisure hours are now spent updating a rolling 24-hour Instagram Story showing what the very elite of local society are passing on, and selling it on to the next tier down.  (The profile, which was presumably written a while ago, suggests that she always visits sellers personally to pick up consignments).  If you’re the kind of banker who’s always had an eye on colleagues’ shoes, handbags and watches, it might be a side-hustle worth emulating.

So far, the fears that wealthy bankers from New York would bring an epidemic to the Hamptons haven’t been borne out – there are fewer cases there than anyone else nearby.  Locals still aren’t overjoyed, but the out-of-season second home owners are at least supporting restaurants and local fundraising. (WSJ)

If you think insurance is expensive … CalPERS decided in October 2019 to end its “tail-risk hedging” program, which took 90 days and meant that they had got rid of it just in time for the coronavirus sell-off to begin. The CIO responsible for the decision says “we need to strongly resist … looking at recent results and using those results to judge the merits of the decision”, understandably. (Institutional Investor)

The owner of a meeting-notes-as-a-service company has looked at his internal data and found a sort of conservation law, as the decline in external meetings has been almost exactly offset by an increase in internal team meetings (Quartz)

And the “social” use of Zoom might be salient to those Goldman employees who have a sideline as DJs – virtual nightclubs are apparently charging, and getting, money from people who want to join exclusive videoconferences with top name DJs. (Bloomberg)