Bonuses Will Be Up - Just Not As Much as You Hope

Wall Street will see a slight uptick in year-end incentives for 2010, according to the annual bonus report by compensation consultants Johnson Associates. The New York-based firm expects cash bonuses and equity rewards to be up an average of 5 percent, with those working in asset management, high net worth and alternative investments reaping the biggest rewards - of up to 15 percent. That's a bittersweet victory since last year this group was hardest hit.

On the flip side, fixed income and equities traders at investment and commercial banks will see their bonuses drop by at least 20 percent. That balances out the trend of last year when their incentives jumped by more than 40 percent on average.

Johnson's findings are based on data from eight of the nation's largest investment and commercial banks, and ten of the largest asset management firms.

Last month, a survey by eFinancialCareers found that half of the financial services staffers in the U.S. expect a higher bonus because business is better than it was in 2009. Those working at bulge-brackets, long-only asset managers and boutique banks expected higher payouts compared to those at hedge funds, commercial banks, independent trading or research and professional services firms.

"We're looking at two worlds. The market base with asset management, wealth management, brokerage and retail businesses has benefited from the market being up over the past couple years," Johnson told eFinancialCareers News. "Then the big downers this year are the big trading, fixed income and equities businesses. But part of the reason they're down is that they did so spectacularly well in 2009. In general it's stable - there are no disasters." 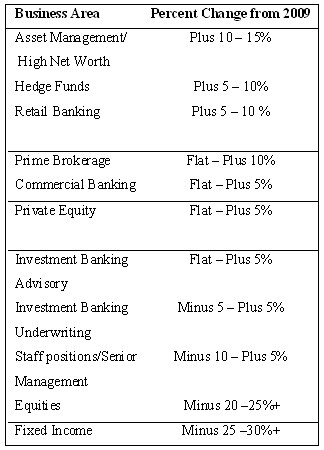 Looking to next year, Johnson expects hiring to be up slightly, with the majority of new hiring taking place in Asia. "That's where growth is in the world, and there is also a lot of hostility against financial services in the U.S and the U.K.," he observes.

While keeping an eye on how regulation will affect pay scales and structure, Johnson also forecasts modest growth in compensation. "There's a lot of unknowns in regulation," he says, pointing out that the mere cost of regulation will impact the industry, not to mention capital regulation. "But the financial services industry has been amazingly resilient over time, so I don't bet against the industry. But it will be harder."