Shares in Bank of America Merrill Lynch ended up yesterday, continuing a run of improvement that began in late October and has seen them rise 6%. However, this doesn't do much to eclipse the fact that they're down 37% since April.

Depressingly, therefore, Bloomberg published an article yesterday speculating that Bank of America is nearing a 'tipping point.' It pointed out that a member of the TARP oversight panel has been expressing public concerns that the bank might need another bailout.

Jonathan Weil, the Bloomberg columnist who wrote the article, suggested no one can really understand BAML's balance sheet and that the market is effectively saying there's a $96.8bn hole in it.

That putative hole is due to 'troubled loans' and the fear that BAML will need to buy back mortgages which were made improperly. The collapse in the bank's share price followed the release of a letter from a Houston lawyer demanding that it do just this.

Yesterday, BAML released its own letter saying it won't be buying back any mortgages and that any problems with them were due to the downturn, not misselling. So far, reception appears to have been muted.

Morgan Stanley is also having issues related to its broader non-investment banking business.

Yesterday, the Wall Street Journal published an article suggesting the bank may not actually be in a position to purchase the 49% of Smith Barney that it doesn't already own.

James Gorman's claim yesterday that it intends to complete the purchase but isn't tied to any date for doing so, is being taken as an indication it would indeed like to wait until 2014.

Banking analyst Dick Bove says this implies two negative conclusions: 1) Morgan Stanley doesn't have the money to complete the merger because of new capital rules; 2) the merger isn't working out as planned.

Either way, says Bove, it's bad for Morgan Stanley's strategy, which hinges upon it building a retail presence and becoming a 'client orientated organisation.' Questions are being raised about whether Gorman can deliver.

In the circumstances, the investment banking businesses at BAML and Morgan Stanley are suddenly looking a lot more important to the overall model. Retaining staff in this year's bonus round will therefore be paramount. This is looking challenging, given that pay's likely to be down in anything associated with trading this year, as illustrated by yesterday's pay table in the Wall Street Journal. 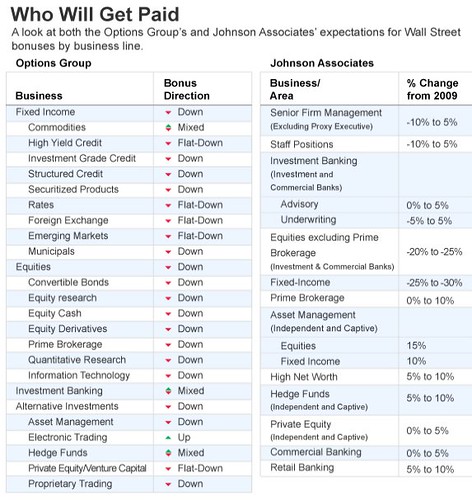