UBS really needs to stop paying so much, but absolutely insists it won't

Today is the day that UBS released its third quarter results. They revealed that the investment bank made a loss.

Despite this evidence of unsustainable costs, UBS investment bankers seem to be doing rather well for themselves. Full year compensation per head currently stands at CHF322k ($331k), higher than the CHF293k at Credit Suisse, and up 14% on 2009. Admittedly, this includes CHF228m for the UK bonus tax, but even without it pay at UBS is still UP.

Actually, those targets are looking a little ambitious

As well as disclosing that it's paying more, UBS also disclosed that maybe its target investment banking revenues have become more of a medium term aspiration than anything that will happen anytime soon.

""We have underperformed in too many areas," said CFO John Cryan, whilst also admitting to "teething troubles" and confessing that UBS's low market share means that when customer flows drop it tends not to get even the "crumbs" from the tables of the bigger banks.

Cryan also said that investment banking has become a far more volatile business than it once was. "We don't have a bedrock of positions on the book [like we used to]," he said. "We're relying on people wanting to do business with us." 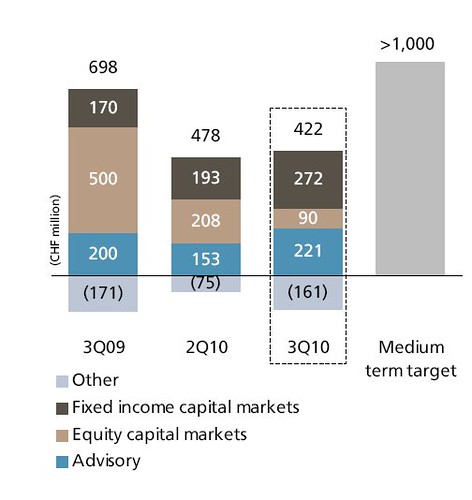 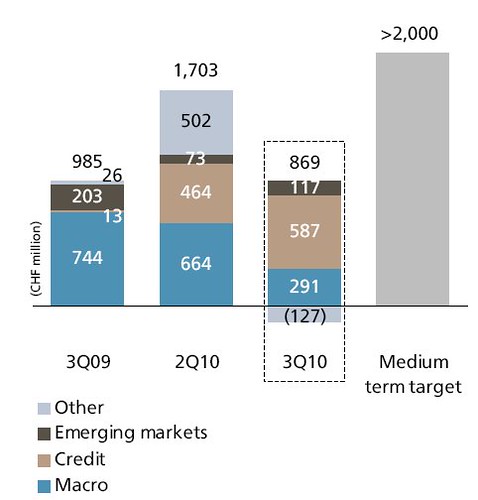 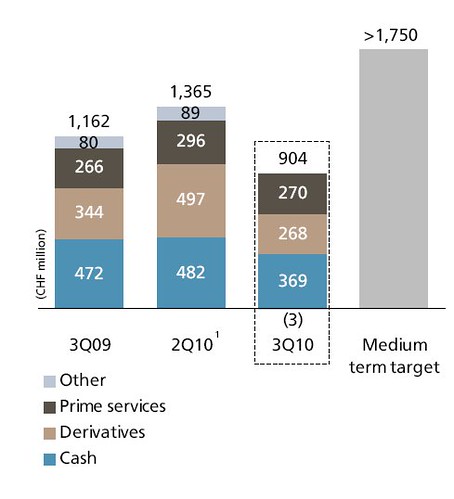 There are absolutely no plans not to pay

Despite the fact that UBS is absolutely nowhere near reaching its targets, despite the fact that costs have gone through the roof, and despite long term intentions to get the investment banking compensation ratio down to below 50% (it's currently at 54-55% for the whole year, excluding the effects of the changing value of UBS's own credit and the payroll tax), UBS insists that it WILL pay its investment bankers this year.

"We are a living example of a bank which experimented with not paying people and it didn't come off very well in 2008," said Cryan.

Nevertheless, UBS's FX professionals are likely to be disappointed by this year's bonus round (Cryan said they need to, "pull their socks up.") Meanwhile, its credit professionals, who had a good third quarter, could be pleased.

Redundancies are the only option anyway

Cryan revealed that CHF1bn of this year's CHF4.5bn of personnel expenses are deferred from last year. Much of the remainder is likely to be in fixed salaries.

If revenues continue to flounder, redundancies may therefore prove the only option.

Cryan denied this was the case. He even said that UBS is still planning to do some sales and trading recruitment next year, but that the increase in investment banking headcount wouldn't be "massive." Unless conditions improve substantially (Cryan said that Q4 is proving better), a reduction may be more appropriate.