I was nearly an MD at Credit Suisse, but I gave it all up to teach Pilates

We speak to Thicha Srivisal, a Thai national and Singapore permanent resident, who gave up her well-paid director job at Credit Suisse to run her own business, Breathe Pilates.

I never grew up wanting to be a banker; instead my dream was to be a professional ballerina. When I was 12, I got accepted into The Royal Ballet School in the UK. My father wasn't too happy about that, so I quit, although I continued to dance as a serious hobby. There were a lot of family expectations for me to go into banking and finance like the rest of my family. My grandfather, Leng Srisomwong, was the Governor of The Bank of Thailand and Finance Minister of the country, so there were hopes I would follow in his footsteps.

While I wasn't specifically interested in finance, I was good in maths. In a way it was a trade-off. I found maths easy so it meant I could finish my homework quickly before dancing. I graduated with a Bachelor of Finance in Bangkok and also obtained my MBA from the Massachusetts Institute of Technology in the US. While in the US, I joined a professional ballet company as a part-time dancer. It was then that I suffered from a slipped disc and took up Pilates to get better.

After graduation, I first worked for three years at the Central Bank of Thailand in foreign reserves investment. I was then headhunted to join Bankers Trust which was later acquired by Deutsche Bank. This was how I found myself working in Singapore in 1996 as a derivatives trader on the Asian arbitrage desk. It was a big change moving into the private sector where it was a lot more aggressive and competitive.

I was the only woman on the trading floor then and being neither a Singaporean nor a Caucasian, I worked doubly hard to prove myself. I stayed on until 2001 when I joined Credit Suisse as a VP structuring derivatives. I rose to director level in 2005, before taking a two-year sabbatical in 2007, and I finally quit in 2009.

Why did I quit? Taking on a management position meant that I didn't get to handle derivative formulas which I enjoyed. It was also tough as a woman leading a team of men; a lot of my time was spent dealing with office politics or defending my team. I worked around the clock, even on weekends and holidays. I was constantly traveling; flying to South East Asia, Hong Kong, New York, London and Switzerland. Working 10 to 12 hours a day was the norm; nevertheless I always made time for Pilates. I got certified as an instructor and taught on a part-time basis. 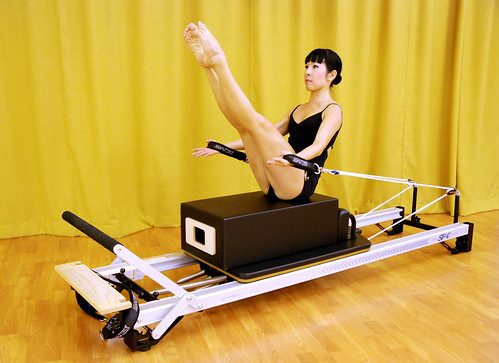 Banking was morphing me into someone I was not

I wouldn't say that I hated banking, although I think in my last two years on the job, I became a lot more aggressive. I had to be strong and confrontational in the job, so it trickled down into my personality. I could see myself changing and I didn't like it. I also didn't have anymore time for my family.

Of course it wasn't an easy decision to quit after so many years. I was at the peak of my career and on my way to becoming a managing director. But at the end of the day, my goal in life wasn't to make lots of money and become a nasty person, so I first took a sabbatical before finally quitting. Once I made that decision, it felt good.

I helped co-found Absolute Pilates in Bangkok and Singapore. I also set up another studio, Breathe Pilates in Singapore with a friend in May this year. As an employee at a bank I had a sense of job security, but now as a business owner I worry about finances. It's a different sort of challenge, but I feel incredibly blessed to do what I do. My banking background has come in handy whether its business projections, dealing with cash flow or remaining calm in difficult scenarios.

I don't feel nostalgic at all about my banking days, even though I had more financial freedom then. I don't miss dealing with office politics. In my current job, my clients come to us with every intention of becoming better, of improving their health. They don't have a hidden agenda - what you see is what you get, there isn't any second guessing.

Of course I may have to handle difficult clients, but that's like everything in life. I really enjoy helping people and seeing them get better. When clients tell me how Pilates has helped them I get a lot of satisfaction, it's why I'm doing this. As for my parents, they have been very supportive about my career switch. Thanks to Pilates, I've also been able to continue dance ballet at a local school here.

If you want to quit banking, here's my advice: think it through before quitting. Yes, people should follow their dreams, but it shouldn't just be about "Oh, I hate this job. Everything should have some logical thinking and plan to it. It definitely shouldn't be a decision you make on the spur of the moment.