Why leaving investment banking was the happiest day of my life

Jeanne Chung, a Korean-American, set up boutique yoga studio Absolute Yoga in Singapore in 2004. She speaks to eFinancialCareers about why she went from high-flying investment banker to certified yoga instructor and managing director of her own business. 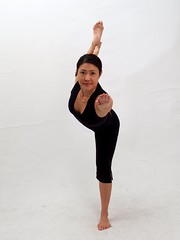 I-banking wasn't my first career choice, but I fell into it anyway

I studied engineering at the University of Michigan and then worked in management consulting for financial services, based in Chicago for five years. That was my first real professional job but I just couldn't see myself doing that for the rest of my life so I decided to do my MBA at the Massachusetts Institute of Technology (MIT).

When I was there everybody wanted to get into banking. This was in the late 1990s during the internet boom. I thought becoming an investment banker in technology, sounded glamorous and cool, so that's what I did.

I joined Robertson Stephens, a boutique American investment bank (which has since closed) in 1997. There, I serviced technology companies, helping them raise growth capital. It was a crazy, heady time because the sector was growing and growing. There were tonnes of deals and IPOs going on.

Banking is one of the more analytically rigorous jobs. You have to use your brain a lot; it's highly competitive, so it can give you a sense of accomplishment that you made your way into this position.

I made a lot of money during that time but I realised that I didn't want to become a career banker. The environment was highly political, quite sexist and the hours were insane, sometimes 100 a week. I would travel for work within the US and to Europe. While that sounded super glamorous, I was in meetings most of the time and had no time to enjoy being away. The hours also made it difficult to maintain relationships with family and friends.

When the tech bubble burst around 2001, it became much harder for bankers. I was also miserable by then, so I decided to quit. I had come across yoga and I really liked it. Towards the end of my banking career, I would pretend to go for meetings but go instead for yoga classes instead.

The decision to quit

The day I quit banking was the happiest day of my life, I even took the analysts out for lunch and we had drinks. I wasn't frightened, I just felt emboldened. I didn't have any game plan when I first quit. The idea was to just take a break for about a year and perhaps go into the buy side and work for an equity fund, but yoga got in the way.

I went on to study yoga and travelled a lot between 2001 and 2004 before deciding to open a yoga studio in Singapore in 2004. That's since expanded to two more studios and we have had about 22,000 students since then, so we're doing okay.

Regrets, I have none

The difficulty of owning a business is it's 24-7. Banking can be round the clock too, but there can be quiet times. Now, if there's an issue going on at the end of the day, I'm held responsible, whether it's about staff, students or service, so it's a very different sense of accountability.

In my current role, I tap on the experiences I've had in consulting, studying for my MBA, and banking. I do marketing, look at statistics, legal contracts, cash flow and deal with accountants; pretty much everything, so my experiences have helped better equip me.

I'm happy I went into banking. I'm glad I know what it's like and that I got to realise it wasn't something I could do for the rest of my life. I think there are people cut out to be bankers and I know people who just love it, but I just wasn't one of them.

If you want to leave banking, here's my advice

There are always politics and corporate changes in any organisation. Salaries, titles and growth are important but ultimately are you satisfied and personally thriving? If you are, everything falls into place. That's the litmus test. You need to find out what suits you in a career, whether it's banking or something else, so that you can put all your time, energy and emotion into it.

I do hear of more bankers leaving the industry to become entrepreneurs than previously. When I left, people asked me "why would you want to do that?", now it's more like "you're so cool", so I do think times have changed and people are more open to career changes.