Oh dear. Look what happened to the number of surplus candidates in May

As we mentioned a few weeks ago, people are muttering about hiring freezes. There's been more of this recently: "BarCap, UBS and Deutsche have all got hiring freezes, hopefully they'll only run for a while," one electronic trading recruiter complained to us last week.

The alleged freezes seem to be taking their toll on recruitment. Morgan McKinley, which can usually be relied upon to paint a rosy picture of financial services recruitment in London, has released some data which makes the reality look a little bleak.

Between April and May 2011, Morgan McK claims the number of new financial services jobs appearing in London declined nearly 20%. At the same time, 121% more people decided it was time to look for a new job (Morgan McKinley points out that not all these people are unemployed - some are still in employment and looking in their lunch break. Some are still in employment and not even actively looking for jobs at all, but have registered anyway).

According to our own calculations, this had the following, depressing effect, on the number of (new) surplus candidates: 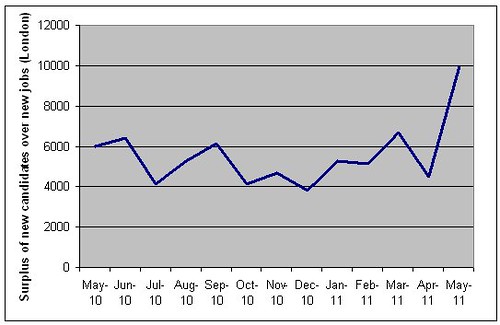 Based on figures issued by Morgan McKinley

More depressingly, these are only the new surplus candidates coming onto the market - there's also plenty of surplus from previous months.

Why is this happening?

Andrew Evans, Morgan McKinley's chief operating officer, thinks it might have something to do with "economic uncertainty" (AKA Greece) and comparatively low staff turnover this year. We think it's probably also related to all the bank holidays in April, which led people to delay looking for a new job until May, which may have been a little late.