Employment numbers in New York's securities industry have fallen to the lowest level since the early 90s.

As the charts below from Securities Industry and Financial Markets Association's Q2 employment report show, there are now 159,200 people working in New York City's securities sector - the lowest level since 1993 when 157,400 were in the industry. 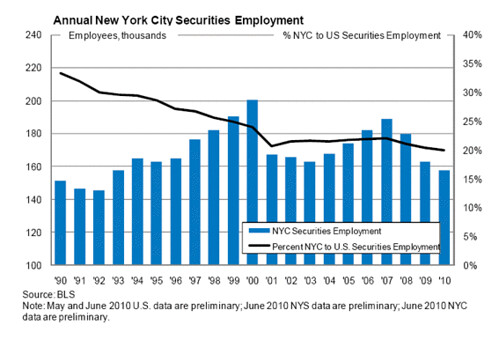 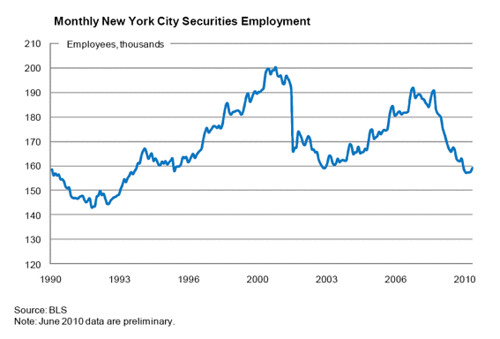 Employment actually rose by 1.2 percent in the second quarter, which amounts to 1,900 positions, but this follows a 3.4 percent decline in numbers in Q1.

Since the pre-Lehman collapse days of August 2008, Wall Street securities industry employment has shrunk by 17 percent, compared to an 8 percent fall in the sector across the U.S., suggesting a move away from New York among American financial services firms.

By contrast think-tank CEBR's (admittedly now fairly old) projections on City employment suggests that there will be 14,000 more financial sector jobs in London by the end of this year.

Any positives for New York? Not that many, sadly. The passage of the Dodd-Frank Wall Street Reform has created more certainty around business planning including hiring decisions, suggests SIFMA, as well as creating a need for additional legal and compliance staff.