Brad Hintz at Bernstein Research has had a look at what could happen to compensation at Goldman Sachs under proposed regulatory changes, and (if you work at Goldman) it doesn't look promising.

Hintz takes two scenarios and models their effects on Goldman's results and comp costs between 2002 and 2007 in order to gauge their potential impact going forward.

In scenario one, he assumes that Goldman operated as if the Volcker Rule had actually been implemented. Revenues from prop trading not linked to U.S. government-related securities are therefore removed; so too are revenues from private equity.

In scenario two, he assumes that Goldman continued merrily prop trading and maintained its private equity operations, but that leverage was restricted to 20 times assets and the firm was obliged to maintain a surplus liquidity pool equivalent to 5 percent of its total assets.

In both cases, pay falls substantially across the cycle, but in scenario one the reduction is far more dramatic.

Under the Volcker Rule, Hintz says Goldman's annual compensation bill would have been 39 percent lower on average between 2002 and 2007. In the boom year of 2007, it would have been practically halved.

If liquidity rules and leverage ratios had been introduced instead, the effect would have been less noticeable, but still significant. Across the cycle, the average comp bill would have fallen 28 percent. In 2007 it would have been down 32 percent.

Fortunately for Goldman bankers, the Volcker Rule is currently floundering in Congress. 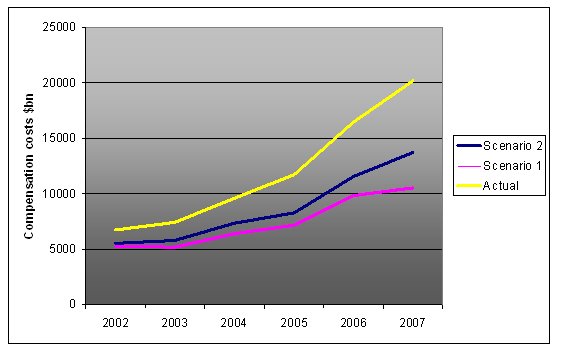